It is estimated that over 82 percent of the 18-23 age group still do not have access to higher education yet till a few years back India annually needed at least 4.5 lakh full-time scientists whereas the availability was hardly 1.5 lakh 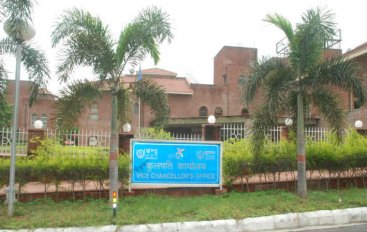 There has been a quantum jump in the number of higher education institutions in India. Besides the number of national universities set up by Government of India jumping from a mere 18 in 2004 to 46 in 2017, there has been a conspicuous mushrooming of state government (332), deemed (128) and private universities (216) across the country. Despite all these, a density of higher education institutions in India is one of the lowest among middle-income countries in the world. Its gross enrollment ratio at the higher education level is still relatively low at less than 25. This is a negative score for a resurgent India and its commitment to be a leading agent of knowledge generation and propagation. Even with one of the highest percentage of the youth population, the fact that India has not been able to harness demographic dividend actually could be attributed to both the thin spread of higher education facilities and also their declining qualities.

It is against this backdrop, Open and Distance Learning (ODL) mode today is considered to be a critical intervention in terms of accessibility, affordability, and quality.  Indira Gandhi National Open University (IGNOU) in New Delhi with over 200 academic programs and a network of 67 regional centers, over 2600 study centers, and 29 overseas centres, today offers education to over 3 million students in India and 40 other countries. It is the world’s largest ODL based university.

No single university and no single institution in India has so much of depth, width, and height as IGNOU in terms of reaching the poorest of the poor and the remotest of the remote. However, like many other higher education institutions it is still not student-centric. It is not able to map a region and its communities in terms of their aspirations and needs. It randomly tracks a student from the time of enrollment to awarding of the degree.

IGNOU triggered a range of ODL based institutions across India. However, most of them face similar challenges. How to bring the ODL programmes imparted through the various Open Universities at par with the programmes and courses offered by the reputed regular universities? Quality, employability and acceptability are three measurable indices. Many institutions both in public and private sectors still perceive that the degrees and products coming out of the ODL system are still not up to the mark.  And many industries and institutions still do not recognize ODL based degrees.

Thus acute yet unsaid misconception is witnessed and recorded in various selection boards varying from university teachers, private sector managers, and civil servants. These issues are also related to relatively lower gross enrollment ratio, accessibility and inclusiveness and a more serious problem of the gap between what is produced and what is required.

For instance, it is estimated that over 82 percent of the 18-23 age group still do not have access to higher education yet till a few years back India annually needed at least 4.5 lakh full-time scientists whereas the availability was hardly 1.5 lakh. There are thousands of vacancies for teaching and research positions across the country lying unattended as these institutions do not get the right candidates to fill in these positions.

In the absence of a national regulatory and professional bench-marking authority, IGNOU itself for decades served as both stake-holding University and regulatory authority. Though the University Grants Commission has now taken over the regulatory function, nothing transformation is on the horizon in terms of both policies and strategies. The ODL running institutions require three-fold strategy to jump-start an easily accessible quality education.

First is to put a collective and nationwide benchmark to ensure minimum quality in terms of materials, delivery, teaching, learning and of course accountability. In this game of quality management, professionally robust and highly accountable regulatory authority could play a pivotal role.

Secondly, it is essential to redesign the programmes that are relevant to the communities and the people at large. How to link schools in the villages and mofussil towns with the university system?  In what way an appreciation for interdisciplinary learning and field and community oriented courses could be nurtured at the school level only.

And thirdly, there is a need to constantly compare these institutions, processes, and products with the institutions that have a higher benchmark on qualities both in India and abroad. For this to happen, the basic approach would be to steadily improve the skills and training components of educational managers, faculty members and other essential constituents and stakeholders.

Another formidable challenge is to drastically transform and not simply change the entire delivery system including the modalities of enrollment, mode of teaching practices, a degree of technological interventions and contents, infrastructural amenities and bottom to top feedback mechanisms. Today also hardly few have some semblance of virtual connections and learning. The basic question is to understand and appreciate the country’s diversity in terms of geography, community, history, culture, environment, economic laggardness and recognition of traditional skills. A huge portion of students is just first generation learners who need to be handled and garnered innovatively and delicately.

This way a critical mass of informed, intelligent and forward-looking younger generation could be generated right at the village and community level. And they will be the actual agents of transformation.

Another challenge is to make ODL system globally oriented. It will sharply enhance level of competitiveness to provide India better global competitiveness indices. The ODL based higher education institutions could be a critical instrument of soft power politics at the global level. ODL instrumentality will be major wherewithal in the conduct of foreign policy and could re-influence India’s traditional partners in South Asia, South East and East Asia, Middle East and of course in Africa and Latin American countries.  This will also integrate the huge labour market in these countries to India’s labour supplies and help reap the benefits of the demographic dividend.  For instance, among the huge aging population in Europe, US and Japan the most conspicuous spurt in demand is that of nurses and health support.  The demand at the moment is met mostly by Phillipinos and others. Could a course like nursing and country-specific language say Japanese be fitted into the ODL network for young and culturally vibrant girls and boys to capture this market?