NEET: SC Asks Centre Whether It Would Like To Revisit Rs 8 Lakh Criterion For Determining EWS

NEET 2021: The Supreme Court questioned Additional Solicitor General KM Nataraj, arguing for the Centre, once again, asking whether any research was conducted before establishing Rs 8 lakh yearly income ceiling for assessing eligibility for the EWS group. 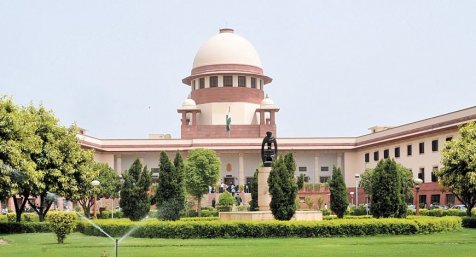 The Supreme Court on Thursday asked the Centre whether it would like to revisit the limit of rupees eight lakh annual income fixed for determining the Economically Weaker Sections (EWS) category for reservation in NEET admissions for medical courses.

The top court clarified that it is not embarking into the policy domain but is only trying to ascertain whether constitutional principles have adhered or not. A bench of Justices DY Chandrachud, Vikram Nath, and BV Nagarathna was annoyed as no affidavits were filed by the Ministry of Social Justice and Empowerment and the Department of Personnel and Training (DOPT) and formulated questions to be answered by the Centre in a week.

The bench said, “Tell us if you want to revisit the criteria or not. If you want us to discharge our duties, then we are ready to do so. We are formulating questions which you need to answer”. It added, “We may stay the government notification fixing rupees eight lakh criteria for determining the EWS and you can keep filing the affidavits”.

Mr Natarajan said that the commission's report was one of the basis for determining the criteria but after that several deliberations were held and other factors were also taken into account.

“Fixing of criteria of Rs 8 lakh is a pure policy matter and the court should not interfere with it. It was decided after proper application of mind,” he said.

Mr Natarajan submitted that the draft of the affidavit by concerned departments is ready and they will be filing it in a day or two. The bench said that it is not going to tell the government as to what should be the limit whether it should be rupees four lakh or rupees six lakh because it is for the executive to decide but all it wants to know is what was the basis for fixing Rs 8 lakh as the limit.

“For determining creamy layer in Other Backward Classes (OBC) category the limit was fixed as Rs 8 lakh annual income and they were considered progressed class among OBCs and they were excluded from reservation benefits. Here, for the EWS category, the limit is the same Rs 8 lakh annual income but it was for inclusion in the reservation benefits,” the bench said.

It added, “You cannot just pick Rs 8 lakh out of the thin air and fix it as a criteria. There has to be some basis, some study. Tell us whether any demographic study or data was taken into account in fixing the limit. How do you arrive at this exact figure? Can the Supreme Court strike down the criteria, if no study was undertaken?”

It asked the Centre to respond to a question that since the income limit of determining the creamy layer in OBC category and EWS is the same that is Rs 8 lakh, whether it would be arbitrary to provide a similar income limit for EWS and OBC. The top court also asked whether rural and urban purchasing power was accounted for and on what basis the asset exception was arrived at and why the residential flat criteria do not differentiate between metropolitan and non-metropolitan areas.

The bench said that as per the explanation in the 103rd constitution amendment says that criteria for EWS will be notified by the state governments, then how can the Centre notify a uniform EWS criterion for the whole of the country. The top court then formulated the question and asked the Union Ministry of Social Justice and Empowerment and DOPT to file their replies by October 28.

On October 7, the top court had posed searching questions to the Centre on its decision to fix a limit of rupees eight lakh annual income for determining the EWS category for reservation in NEET admissions. The Centre had then said fixing a limit of Rs eight lakh annual income for the EWS category is a matter of policy based on the National Cost of Living Index. On September 17, the top court has agreed to hear a batch of pleas of students against the July 29 notice providing 27 per cent reservation for OBC and 10 per cent for EWS category in 15 per cent UG and 50 per cent PG All India Quota seats (MBBS/BDS and MD/MS/MDS) with effect from the current academic session 2021-22.